As it’s Halloween today I thought I would talk about the Celyn Villa ghosts!


A couple of years ago we had a couple of Spiritalist Mediums staying with us in the bed and breakfast and out of curiosity I asked them if we had any ghosts in the house. They looked at me and said ‘yes we have picked up two’ ‘the first is a young girl who runs around the kitchen and  is very happy when you are cooking and baking’, oh I said feeling rather taken aback as I didn’t really expect them to say yes. ‘You should talk to her when you are cooking, it will make her happy’. So when I remember I do say hello.


However the Information they gave about the second ghost was a little more scary. They said there was an old man who sits in a chair by the fire in the hall. Again he was perfectly happy and wouldn’t cause us any harm. They described him as being an old gentleman wearing a frock coat and a top hat so they thought he might be  from the Victorian era. The reason this was spooky was because when our daughter was about 3 or 4 she asked me one day ‘who is that old man mummy’. I asked her to describe him, she said he was old and had a big hat, and was  ‘there in the chair by the fire’.  Well you can imagine I was freaked out at the time but forgot about the incident until the Mediums told us about the ghosts.


Luckily both our ghosts seem to be friendly as many people who stay with us say what a friendly house it is. Personally I have never seen either of them but sometimes I do remember to say hello.  As the house is so old there are lots of creaks and noises all the time but maybe some of those could be the Ghosts! 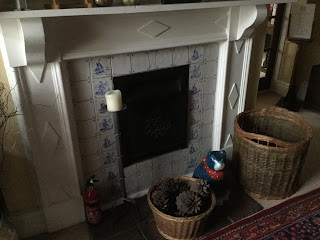 During the winter when the bed and breakfast is quieter I can indulge in my various hobbies. Painting, sewing, knitting, crochet and of course cooking. In fact anything creative. Last year I also started to have piano lessons. Les surprised me with a lesson for a present and arranged with a friend to teach me. Sadly I didn’t get around to playing much during the summer as we were too busy so by the end of last year I had forgotten most of what I had been taught. However I have spent the time during the past few months practising and are just about to start lessons again I hope. So by next Christmas I might be able to play a few carols.

I have also been doing a lot of crochet, making squares for another blanket ( I made one last year) as they are easy and quick to make ( the squares not the blanket).  When I got a bit tired of the squares, I have done 175 and I need about 250,  I decided to make some more bags to sell to guests. I have just sewn in a lining and they are now available. 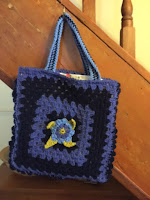 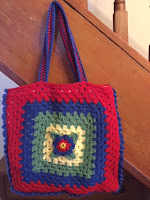 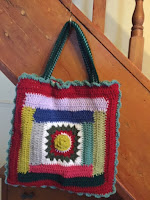