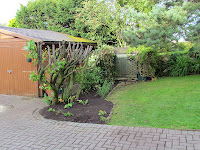 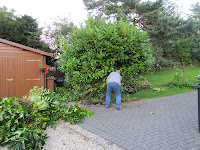 Things grow so fast in the garden and this year it seems with our crazy weather; hot one day and wet the next, everything has gone mad. Les having trimmed the leylandii hedge at the back of the drive decided that we should also trim the laurel hedge. It had become a little overgrown I admit, but when the chain saw came out and branches started falling to the ground, I was a little concerned. But like a bad visit to the hairdresser when the once long tresses start getting shorter and shorter so the laurel hedge was trimmed. First this way and then that until – well it’s nearly all gone. 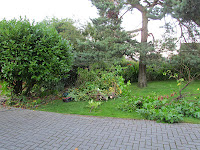 Two days of clearing up and 5 trips to the trip with the waste followed and we now have a short but tidy hedge. At least we won’t have all those awful leaves falling this year and the undergrowth has been cleared away for some new shrubs to be planted. ‘It will grow back again’ Les said. I’m sure that’s what the hairdresser said! 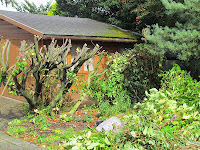 Can't wait for the Paralympics

For two weeks I have to admit I was glued to the TV. From the fantastic opening ceremony to the last note of The Who at the closing one I was hooked. London looked wonderful and our athletes did us proud. All those years of hard work and dedication paid off with our fantastic medal count. It’s funny really as we are not big sports fans; football never gets a look in on our TV, but we got caught up in the occasion of it all and for two weeks were part of a proud nation. Everyone we spoke to was talking about it, over heard conversations in the street or shops were about the Olympics. Close by in Flint we have a Gold medal winner in the shape of young Jade Jones who won hers for Taekwondo. I am looking forward to seeing the Gold post box that must have been painted in Flint to honour her and of course the stamps.
Following on from the Tour de France Les and I got our bicycles out and have attempted the odd ride or two. We didn’t think we could have been more thrilled than when Bradley Wiggins won the Tour and we weren’t expecting such excitement in the Velordrome during the Olympics either. Fantastic!
But now they are finished and everything is flat again. Why ? Not because of the end of the Olympics but because the newspapers and media have now reverted back to the usual depressing negative spin on everything.
Can’t wait for the Paralympics to start –we might gets some good news again.