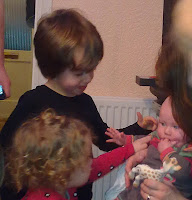 We spent the Christmas break at my parents in Surrey. My Dad 'God bless him' had brought up half of the shops already by the time we had arrived and we still managed another two trips before the big day. By the time we collected the 17 lb (8 kilo) turkey on Christmas Eve I had already baked mince pies, sausages rolls, made trifle, and meringues. The vegetables, pigs in blankets and the homemade stuffing were all prepared and then I rescued a Christmas pudding which I had made last year. When I say rescued it was so hard that I doubted that it would be edible but, having steamed it for 3 hours and added rather large amounts of alcohol , it was delicious.
Christmas day was hectic, cooking for 10 but it was a lovely day. On Boxing Day my nephew and his wife came with their two adorable children so we were 14 for a while! It’s so lovely seeing little ones at Christmas time – they were so excited about their visit from Father Christmas. I love Christmas but enjoy it so much more when there are young children around.
Due to the strike by the tube drivers on Boxing Day we decided to drive our daughter back to her flat in north east London. It ended up being a four hour round trip to do 80 miles. What happened to our country that all the shops are open and it is as busy as a normal day on a Christmas bank holiday? Sometimes in my wild moments I long to be French, they still have proper Sundays and Bank Holidays where everything is shut. Coupled with no trains it seemed that everyone was on the roads? But alas I was wrong because on Tuesday when we drove back home to North Wales we had a very long 8 hour drive. I have never seen so much traffic north of Oxford. It’s always busy in the South but normally as soon as we hit the A40 it improves. In my very tired stupor I realised that I had been driving for 12 hours out of 24! It’s so lovely to be back in sleepy Carmel where the traffic flows gently; my days of enjoying the hustle and bustle of the busy metropolis I think are well and truly over.
Now it’s time to start thinking about our 1970’s New Year‘s celebrations – Hippies, Glam Rock, Will there be Cheese and Pineapple on sticks, Prawn Cocktail, Chicken Marengo and Arctic Roll! All washed down with a nice glass of Riesling! Or should it be a Vesta Curry. Still the music will be good. Happy New Year Everyone!
Posted by Paulene at 10:51 No comments: 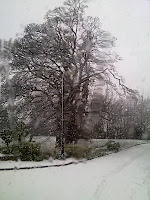 We had planned a nice day trip to Manchester to the Christmas Markets to do some last minute shopping. We woke up to a dusting of snow but by 9.30am it was snowing quite hard. We walked to the coach stop at the Half Way House ( we were going with Voel Coaches) and stood for more than half an hour with 3 other ladies waiting for the coach. By the time the coach arrived we all looked by snowmen. It took us an hour to get to the A55 (2 miles) and were finally on our way at 11am. We had a lovely time in Manchester and got back safe and sound thanks to our driver Stuart. Luckily the roads are now clear but it is definitely starting to look a bit like Christmas. Getting excited now.