Phew! That's February gone. It’s been a busy month for us with the B and B picking up, a trip down South to collect our daughter, friends from France visiting and all systems go in helping to plan the 10th anniversary of the Holywell and District Twinning Association. 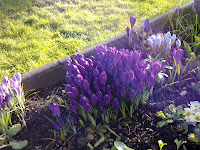 The garden needed a bit of a spruce up too and after only a few hours weeding and cutting back the spring flowers are looking lovely. 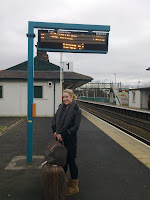 Our daughter Megan heads off to Canada on St David’s Day to work. She has a 12 month working visa. Hopefully we will be able to go and visit her later in the year. It was very sad saying goodbye but we know she will have a good time. Both Les and I (those of you who know us will have heard Les talking about all his travels) benefitted from travel when we were young and it’s just as well that we had no idea what our poor parents felt like saying goodbye to us. These days we have mobile phones, email and Skype to keep us in touch but back then it was just the odd airmail letter arriving on the doorstep which was then re-read many times. When Les’s mother died, 10 years ago, whilst sorting out her things we found all of the letters he had sent her when he was travelling. Rereading them had brought the memories back to life for him. Will we get the same nostalgia from Facebook in years to come I wonder. 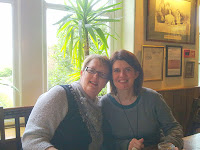 Last weekend we had a visit from our old Au Pair who came with her mum for a few days. When Meg was seven, she came and stayed with us and since the first day we met her she became part of the family. We have spent many happy times with her and her family over the years, including her lovely wedding seven years ago and she now has two small children of her own. Several girls came to be Au Pairs as I worked full time, and we have kept in touch with most of them, little did we realise at the time what an impact it would have on our lives.
Getting to know and understanding people from other countries and cultures can only really be done by interaction with their daily lives – just going on holiday and seeing the face they want us to see tells us nothing really. I suppose its why Les and I got involved with the Twinning Association 10 years ago and here we are helping to plan a big anniversary weekend in May. The twists and turns we take in life lead us to many interesting places. And 26 years ago today on March the 1st 1986 we moved to Wales – so happy St David’s Day everyone. 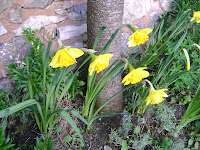 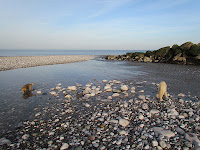 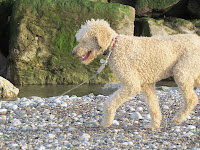 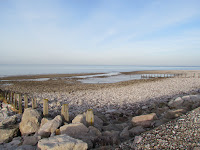 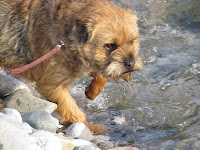 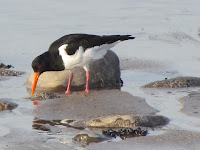 Whilst most of the country seems to be snowy, here is North Wales we have been enjoying some cold crisp days, with lovely winter sunshine. So today (no guests tonight) we decided to go and enjoy the beautiful day. During the busy season we have our sausages delivered from Edward's of Conwy but to make the most of the day we decided to go and collect them. We packed the dogs up in the back of the car and after our quick trip to Conwy (also getting some of there lovely filled rolls for lunch- although we did pack a flask!) we drove down to the beach at Llanddulas and parked up and enjoyed our lunch. We then had a fantastic walk along the pebble beach and part of the North Wales coastal path. The dogs loved it and having packed the camera took a few pics of them, the birds and the beach. Bliss or Darby and Joan!!!
"We'll sit and look at the same old view,
Just we two.
Darby and Joan who used to be Jack and Jill,
The folks who like to be called, What they have always been called,
"The folks who live on the hill".
With thanks to Oscar Hammerstein II & Jerome Kern's 1973 'The folks that live on the hill'.
Posted by Paulene at 09:01 No comments: 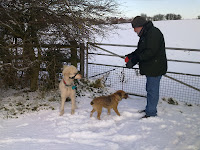 What a disappointment - no snow here. In fact its been a lovely day. So here is a picture from last years snow - just to remember how cold it was. But the dogs enjoyed it.
Posted by Paulene at 13:47 No comments: