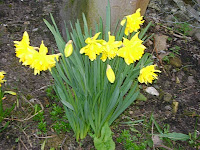 Despite ongoing dramas that we all have from time to time in our lives I have been trying to focus on the positive side of life this week.

Spring came for a couple of days. Hot sunny weather with blue skies it was enough to make me smile and realise that the winter doesn't really last all year - it just seems like it. 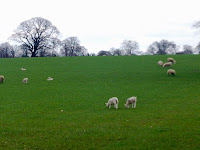 I have had my first session at Erddig this week, showing children what it was like to be a Victorian Servant. (see previous blog about this). On route to Wrexham I passed fields full of tiny lambs and gardens and hedgerows full of daffodils. 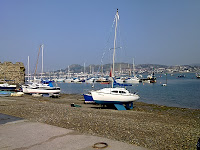 I drove to Conwy and walked to the harbour where I sat amongst couples eating fish and chips whilst I ate my apple and banana - not easy. Got stuck in traffic on the way there due to road works on the A55 but came back the scenic route and it was lovely.

I have been busy on the computer inputting information for a new website for tourism in Flintshire.

I welcomed lovely guests to the B and B and fed them both breakfast and evening meal.

I went to the local pub that has reopened after being closed for over a year - saw lots of people from the village - lets hope the new landlords can make a go of it. Good food is the answer.

I had my hair done. 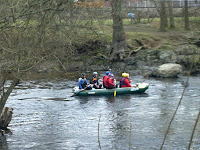 Last year when Les was 60, our daughter gave him 'an extreme experience' gift. Having looked through all the wonderful things you can do - bungee jumping to skydiving; sensible Les decided that he would like to try White Water Rafting. Many years ago in his back packing days it was something Les wanted to do when he visited New Zealand. Being on a tight budget then it was impossible, so it was an ambition that has taken many years to achieve. Luckily here in North Wales we have a several of places you can do this and Llangollen being less than an hour away seemed the ideal location. 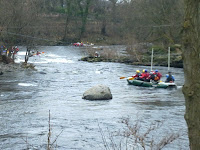 After being kited out in wet suites, helmets and buoyancy aids they had a full training session before carrying the raft to the waters edge. They were with another couple and two guides who quickly made sure that they were all 'dumped in the water'. After more training and practice they were off down the rapids in high spirits with the adrenalin pumping.
Our daughter came home for a few days so that she could join in the 'experience' but I chose to watch from the bank, taking pictures and once they were out of sight retired to the cafe for a couple of hours relaxation.
The verdict afterwards: fantastic, really enjoyable and they would definately do it again. Maybe I wont be such a coward next time and join them, but then again!!!

It's my silver moving to Wales Anniversary

25 years ago today, St David's Day Les and I moved to Wales. It's incredible to think where the time has gone and what has happened in the meantime. We had only been married for just over a year when Les had the chance to move with his job. His father was Welsh and as a child Les spent many happy holidays in North Wales visiting his grandparents and family. So when the opportunity arose he jumped at the chance and I jumped with him.

Moving day was a bit of a nightmare – we woke up to a couple of inches of snow and had to quickly change our plans of driving both our cars (I had a 2CV at the time which wasn’t equipped for bad weather) so I went with the removal lorry and Les drove his car with our 2 cats and our 10 week old Springer spaniel puppy. He definitely drew the short straw as the cats were out of the basket before he had driven 5 miles and our puppy turned out to be a bad passenger, something that continued for all his life. He hated the car and it’s probably due to that journey.

Luckily today has been absolutely lovely, with bright sunshine and blues skies – Les and I are celebrating with Welsh Lamb and a bottle of bubbles. Here’s to the next 25!
Posted by Paulene at 09:39 1 comment: