Another busy month with lots of activity in the B&B but I finally managed to get to meet my new niece, the lovely and beautiful Emilie Elizabeth. What a joy this little bundle of cuteness has brought to her proud Mum and Dad and the rest of the family. 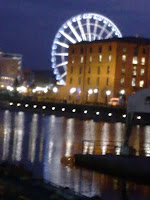 We also managed to have a night away in Liverpool as although we have visited many many times we wanted to spend some time at the museums which we had previously missed. We did both the Maritime and The Slave Museums, both very different but both very interesting. With the local connection here in Holywell with the triangle trade it was fascinating and fairly harrowing to get a taste of what those dreadful days were like for many. Afterwards we needed a bit of light heartedness and took a ride on the big wheel; we then had an ice-cream and felt like real tourists. Liverpool is certainly worth a visit these days. 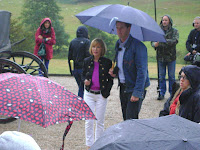 But the real fun was on Wednesday night, because at 7.30pm on BBC1 Les and I were on TV! Erddig the wonderful National Trust House near Wrexham were I volunteer was the subject of the TV programme National Treasurers Live. Volunteers were asked to go along and make up the audience and in the opening scene you can just see me in the distance in my Servants outfit on the left hand side of the screen. 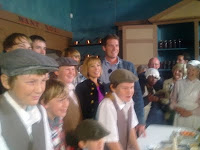 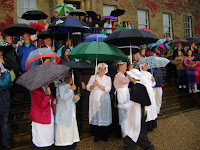 But our 3 seconds of fame came when we were moved from the crowd in the kitchen, to the hall under the bells and Dan Snow the presenter stopped in front of us to ring them. So that now being my third appearance on TV, it will probably be my last. Third I hear you ask (or not) but for those who don’t know about my TV career let me tell you now.
My first appearance was back in the early 70’s when Nationwide (like the One Show I think) came and filmed us at 7.30am on our commuter London bound train at Christmas. We always had a party, Mince pies and sherry for all. I think then I had about 10 seconds of fame. Thirdly my appearance in 2009 on Britain’s Best Dish which was my star appearance if only for breaking a glass when trying to Brulee the top of my dessert.
Still all was not all lost and I went on to win the heat. But although fame is not really my thing I did learn how much time and effort goes into making a half an hour TV programme, no wonder it costs so much money.
Posted by Paulene at 08:48 No comments: